Let's explore this claim.  I've seen it posted in various forms on Facebook. 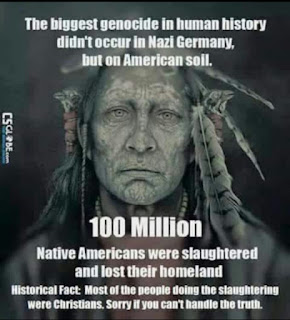 I've been on a "How do you know what you know" kick lately and am trying to ask folks to explore the truth about any truth claim.  Let's take jab at this one. Before Columbus it was estimated that the population of all Native American tribes throughout South, Central, and North America was around 50 to 100 million. Two to 18 million were estimated to live in North America. Over the years that number grew of course but it never reached 100 million in North America. No where near.  And yes, some might point out the reason for the lack of high population is due to the number who died of European disease.  Out of the total number throughout the Americas, approximately 92% died of disease brought over by Europeans over about a 300 year period.   Tragic of course, but it wasn't deliberate. And Christian & non-Christians alike brought these diseases such as small pox and other epidemics from Europe. Ignorance was the cause. And ignorance is what I am attacking in my comments here. There were, however, deliberate attempts to annihilate Native Americans. There were also actions taken by our government which caused many deaths. These were, indeed, calculated measures intent on dwindling down the Native American population. The trail of tears directly caused the deaths of between 5 & 20 thousand. Many of these were the elderly and young. Most Christians at that time were deceived into thinking this re-location program was going to be a good thing since they felt it would remove them from the animosity surrounding them.  Only one group, some Baptists tried initially to stop this "Indian Removal Act".  Their motives may have been pure, but they did not take into considerations the irresponsible act of forcing these indigenous people out of their homeland or the terrible consequences of the transport.  Many missionaries accompanied these Indians trying desperately to provide better provisions. There was no doubt hatred poured out on these Native Americans.  One awful attempt to exterminate Indians occurred at the Sand Creek Massacre. The army opened fire on about 150 Indians from various tribes. One soldier, Col. John Chivington had this to say, "kill and scalp all, big and little; nits make lice." The soldiers were said to have cut fetuses out of the women, slaughtered infants by stepping on their heads with their boots, cut the genitals off men and women, and decorated their horses and wagons with body parts and then paraded them through Denver. Does this sound like someone who has given their life to Christ? Is this someone who realizes that life is a precious gift from our Lord? No. In fact, just because someone calls himself or herself a Christian means nothing. Only those who have surrendered to Christ are entitled to claim His name. I could go on but one more point then I'll drop it. Each year in the U.S. there are about 16 to 17 thousand homicides. That number is dwarfed by the number of people who have died through medical malpractice which is about 225 thousand and upwards. What is the take away? In the instance of death by Doctor, it means that Doctors and the medical community need to continue to improve, study, research, commit, and apply the highest standards of patient care. We do not condemn Doctors who genuinely want to help people.  We do not condemn Christians who genuinely want to honor the God of love by loving others.  Ignorance should be the focus of our condemnation. For me, as a Christian, I also need to do the same and allow the Holy Spirit to change my heart, making me more like Jesus Christ my Savior and Lord. God's Word tells me how to do this. I must learn and apply more of it to my life.  Many who claim the name of Christ fail to do this and thus they make terrible choices.  Apart from God's revelation, mankind will always try and "suppress the truth." (Romans 1:18) Ignorance is no excuse. And as such, this is why I thought I would do my part to challenge this incredibly irresponsible and deceptive claim.  Before throwing your fiery darts at me, please research for yourself.  If I am wrong, I will own up to it.  Truth, not revised truth, should be our source in making any claims.
Posted by Letters to Skeptics at 10:13 AM