The Tragedy of Man 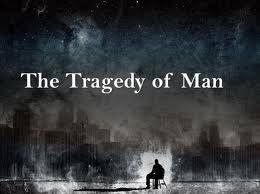 Quoting from Arthur W. Pink (1886 to 1952):  Throughout the ages man’s efforts have been directed toward ruling and regenerating the world. Man has been given full scope. With what results? With the result that the incurable hatred of the human heart to God and the utter depravity of ...human nature have been fully displayed. How has man used the freedom, the opportunities, the privileges, the relents with which his Maker has endowed him? To what profit has he turned them? Have they been used with the purpose of glorifying God or of deifying himself? To ask the question is quite enough. Loud have been man’s boasts. Lofty have been his claims. Pretentious his vauntings. Such terms as improvement, advancement, enlightenment, evolution, civilization, have been his favorite slogans. But the wisdom of this world is foolishness with God, and the folly of the world’s wisdom and the vanity of man’s claims are now displayed before our eyes What has ‘civilization’ effected? With all our so-called enlightenment and progress unto what have we attained? Let the records of our Law-courts tell us. Let the columns of the daily newspapers make response. Let the economic, political and moral conditions of the clay make answer. Let the world war with all its inhumanities, its barbarities, its fiendish atrocities, give reply. And mark, it cannot be said that these things are clue to man’s ignorance and inexperience. Man is not just starting out to make history. We are now living in the twentieth century of the Christian era. Man then cannot—complain that God has not given him plenty of time to mature his plans. No; God has given ample time, time enough to show that he is an utter failure, time enough to demonstrate that he is totally incapable of governing himself, time enough to prove that if relief comes at all it must come from outside of himself.