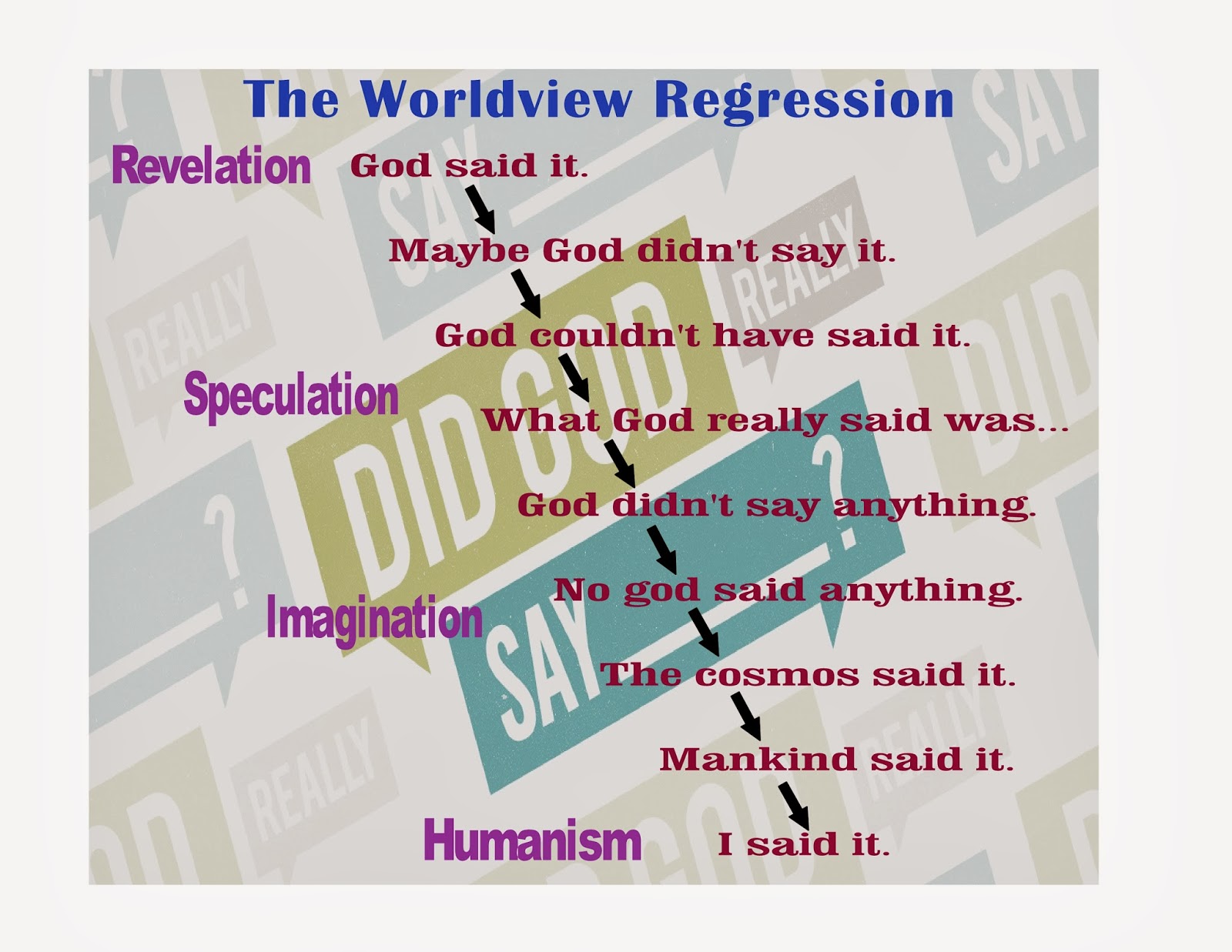 Posted by Letters to Skeptics at 10:30 AM No comments: Links to this post

Is Evolution compatible with the Bible?

Is evolution compatible with the Bible?


Are the truths of Scripture compatible with the tenets of evolution?  Before deciding, a greater question must first be asked.  Upon what authority will you base your decision?  Or better put; can we trust what Scripture tells us concerning creation and the origins of life?


You will find that the position of those favoring the evolutionary model is not actually based on scientific findings.  Evolution is not a “theory” so much as it is a world view.  It is flawed science at best.  Evolutionists take the position that God does not exist and therefore must find some other explanation for the world, universe and the existence of life.


Evidence for God’s supreme power and intelligence surrounds us both day and night, but the one who ignores the revelation that creation brings will ignore the revelation that comes from God’s Word.  If we claim to be followers of Christ, and say we believe in the inerrancy of Scripture, but also believe the claims of evolution, then the Bible must either be inaccurate, misleading, or wrong.  There are many theories and contrived explanations which try and bond evolution and Scripture.  Some of these are referred to as the gap theory, the day age theory, and the progressive creation theory.  Each of these explanations must rely on re-interpretations or the inaccuracy of scripture.  Those who expound these theories end up digging themselves into a theological hole.  They must then deny other scriptures which support the literal six-day account of creation stated in Genesis.  They begin a process of speculation which relies on human wisdom rather than God’s wisdom and truth.  As Christians, we must humbly submit to God’s revelation in His Word and in our lives.  In so doing, we are allowing God to be the authority, not man.


Another way to put it:  Are you going to rely on the authority of a 4-pound mass of tissue between your ears to make accurate analysis of data that is thrown at it, or will you rely on the One who holds all knowledge and allow Him to reveal His truth to you?


Let’s get back to the original question.  Are evolution and the Bible compatible?


Let’s first lay a foundation.  The eleventh chapter of the book of Hebrews contains what has come to be known as the Heroes of the Faith Hall of Fame.  Before the names of these honored Saints of old are mentioned, the writer begins with a curious statement of faith.


Hebrews 11:3 says this, “ By faith we understand that the worlds were prepared by the word of God, so that what is seen was not made out of things which are visible.”


How might we re-phrase that?  It appears that the very first step of faith is belief in creator God.  This stands in stark contrast to those who espouse the “Big Bang Theory” which states that all matter came from a condensed blob of hydrogen along with a host of other matter.  A big bang flung everything into space which just happened to form the intricate order of celestial objects which make up the known universe.

The following are just a few examples as to why Evolution and the Bible are not mutually compatible.

1.                  Jesus attested to the authority of the Genesis account by stating in Matthew 19:4, “Haven’t you read,” He replied, “that at the beginning the Creator made them male and female,’” Are we to doubt Christ’s words?  He brought validity to the Genesis account of creation.  His words “at the beginning”, refers back to this account of creation.   And there they were; male and female, right from the very beginning.  We learn from Genesis that sin, death, and corruption in the world came through the fall of Adam and Eve.  Oh, and by the way, Genesis also tells us that in the beginning all living animals, including mankind, were vegetarians.


Evolution relies on millions of years of death, disorder, and destruction before human beings ever came on the scene.  And yet, God declared that His creation was all “good” in the beginning.  Would God have used such a cruel, haphazard, inefficient, and wasteful processes to bring about this “good” creation?

According to the Bible, God did not create the world full of pain and death. Instead, it was the self-centered, rebellion, and wickedness of humans that spoiled the perfect peace and harmony which God had created.    In the words of Romans 8:19–21, because of man’s evil, the creation was “subjected to futility … and a bondage to corruption.”


Here’s the problem.  Science has never observed this happening, nor does the DNA code of information allow for macro evolution.  This would require new information to be added to the DNA code which is impossible, using known conclusive scientific observation.  And, by the way, DNA itself is a vast complex storehouse of information.  Imagine several million letters and words dropped from an airplane which, when landed, formed several volumes of Encyclopedias.  Yet, this is an illustration of what evolution would require you to believe.


3.                     The gods of evolution are time and chance.  Neither is a friend to evolution.  Mathematicians have time and time again shown just how improbable it would be for evolution to occur by “chance.”  That’s why some evolutionists have resorted to explaining life on earth as having come from aliens seeding the earth.  (Seriously – that explanation was provided by Richard Dawkins, a well-known atheist and evolutionist)  Yet, where would these aliens have come from?  We’ll read a bit later from Romans 1:18-25 and see where this line of reasoning originates.   Chance is a big factor in Evolution.  The Bible leaves nothing  to chance, but reveals a God who is in constant control of His creation.  Examine, not only the order and harmony of everything around you, but look at the history revealed through scripture.  God worked out His plan to bring about the Messiah, the Christ / Savior / Lord at the precise time and place in history.  God is the God of time and space.


Ephesians 1:11 says this, 11 also we have obtained an inheritance, having been predestined according to His purpose who works all things after the counsel of His will”


5.                   According to the laws of thermodynamics, encompassing what is also known as entropy, states that all matter progresses from order to chaos; not the other way around.   Yet, evolution requires matter progressing from chaos to order, thus denying this well established law.  The Bible, too, states that life and matter is progressing from order to chaos.  The Bible states that the early generations of mankind lived for hundreds of years.  Life spans began to be shortened after the flood.   Again, Romans 8:19–21, tells us that the creation was “subjected to futility … and a bondage to corruption.”


6.                    Evolution relies on “beneficial mutations.”  There is no evidence to support the premise that a mutation strengthens any living organism.   Mutations always result in weakened life forms.  Mutations do occur.  Change does take place within a species.  Mutations result in disease and diseased organisms, and birth defects.  What does the Bible say as to reasons why this is so?  Again, the fall of man resulted in the entrance of sin and corruption as we read earlier.


7.                    For evolution to work, it must depend on time.  Accumulated defective decay and corruption threatens life on this planet.  Time makes it more unlikely that things would go from chaos to order.  If not for a benevolent God, we would have long ago been consumed by all of this corruption.


8.                   Natural Selection is true.  The evolutionist got that one right.  This explains why there are varieties within families, genus, and species of plants and animals.  Natural selection helps explain how poodles came from the same line as wolves.   This is why Noah would not have necessarily had to bring every species and sub-species of animals on to the Ark.
9.                   How about the age of the earth?  What about carbon dating, radioactive decay, chemical analysis of rocks, etc?   Over and over these methods are proving to be inaccurate.  Also, for each to work, it must make several assumptions.  For instance, the flood account in Genesis is thrown out entirely as having any viable explanation for the layers of rock and the age of the earth.  Could God have created the heavens and earth with the appearance of age?  Of course.  Could God have created heavenly light to give the appearance of billions of light years from earth?  The Bible contains 11 references to God who “stretches out the heavens.”  As it turns out, science has confirmed that the universe appears to be expanding or “stretching out.”  The Bible account is confirmed.


Why do so many people resort to the religion of evolution to explain life and the origin of the universe?     Romans 1:19-22 gives us a clue:


“ 19 because that which is known about God is evident within them; for God made it evident to them. 20 For since the creation of the world His invisible attributes, His eternal power and divine nature, have been clearly seen, being understood through what has been made, so that they are without excuse. 21 For even though they knew God, they did not honor Him as God or give thanks, but they became futile in their speculations, and their foolish heart was darkened. 22 Professing to be wise, they became fools” (emphasis my own)


This Biblical truth, in summary, explains and reveals why so many people refuse to simply believe God who created all things and reveals himself through His Word, the Bible.
Posted by Letters to Skeptics at 11:28 AM 2 comments: Links to this post